I started watching Friday Night Lights a few weeks ago and now all I want to do is eat barbecue, watch high school football, and be Tami Taylor.  Seriously, every person who is female should want to be Tami Taylor.

If you don’t agree with this statement, then either (a) you haven’t watched Friday Night Lights, or (b) you’re completely wrong and probably should just leave my blog right now.

I didn’t think I’d like Friday Night Lights mostly because it’s about a high school football team, and I don’t give even half a hoot about the sport.  But then I started watching (based on the urgings of several friends) and saw that the show is about so much more than football.  It’s about family and friends.  It’s about finding one’s identity and overcoming obstacles.  And, yes, it’s also about football.  But the football gets more interesting when you learn the backstories of the players and coaches.  There’s usually about one game in each episode and I am on the.edge.of.my.seat watching.

So, basically, this is a pitch for you all to watch Friday Night Lights.  It’s a great show with really solid writing, characters and acting.  Plus, the entire series is on Netflix which makes it the perfect series for a weekend binge!  So, cheers to that!

When you’re binge-watching Friday Night Lights this weekend you should be eating this quinoa salad.  Why, you ask?  Well, for starters, it’s amazing.  I know I say that about pretty much everything I post, this one is the real deal.  Quinoa, apples slices, cranberries and roasted eggplant are tossed in a smoky cumin-viniagrette.  It’s a step beyond your average quinoa salad.  And let me tell you, folks, you’ll never look back. 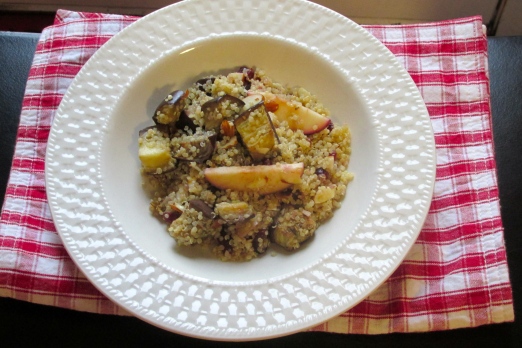 Whisk the oil, vinegar, salt, pepper, cinnamon, cloves, and cumin together in a small bowl until thick and blended.  Stir in the shallot.

Preheat an oven to 400 degrees

In a medium saucepan, bring the broth to a simmer and add the quinoa.  Reduce the heat to medium low, cover, and let it simmer until the broth is absorbed and the quinoa is tender, about 15 minutes.  Remove the quinoa from heat and let stand for 5-10 minutes.  Transfer the quinoa to a large bowl, let cool, and fluff with a fork.

Toss the eggplant with oil, salt and pepper in a large baking dish.  Roast for about 30 minutes, until browned and tender.

Take the cooled eggplant, vinaigrette, apple, walnuts and cranberries and add them to the quinoa.  Toss to blend. 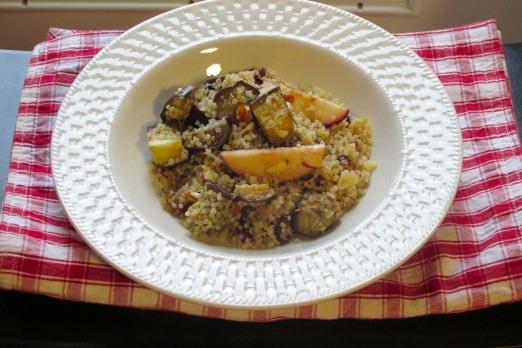